The Toronto Mini Maker Faire 2013, which was a huge success!  4000 people came through over 2 days to see 40+ makers exhibiting their work. 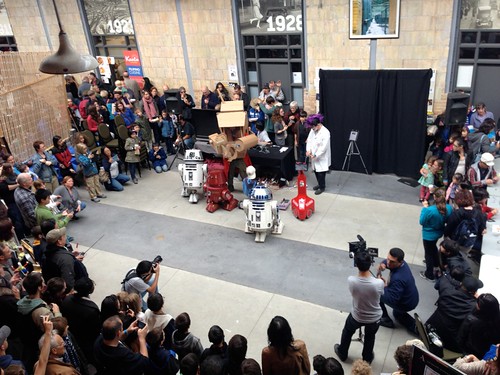 So I’ve been super AWOL on the blogging, but I’ve resolved to catch up with one post a week for awhile.  I’ve got about 10 events I want to blog about :-).

The first is of course the Toronto Mini Maker Faire 2013, which was a huge success!  4000 people came through over 2 days to see 40+ makers exhibiting their work.  As co-organizer, I was super busy keeping all the logistical details working, and getting interviewed by the media.  But really I was mostly excited to have so many awesome things to see, as is typical at mini maker faires.  My favorite things were the chocolate 3D printer, Natali’s glass fish, and the R2D2s, but there were so many great other things, like the illegal aliens (wicked metal sculptures), all the 3D printers, the advanced laser tag (with 3D printed laser guns and wearable vests with lots of electronics!), the lockpick village, etc.  Pictured is the photoshoot at the end of the Robot Cavalcade, where every robot in attendance paraded through the barn, which was super fun.  Our learn how to solder workshop was super super popular, we taught 700 people how to solder, and could have done way more, except that we ran out of kits (because I totally underestimated how popular it would be :-().

For next year, we’ve already secured the Toronto Reference Library at Bloor & Yonge for next year’s faire – it will be about 3x as big in terms of square footage, which should hopefully allow us similar growth in maker numbers and people in attendance.  I’m very excited about it already, but planning is really on just beginning.  Mark your calendars for Nov 22 & 23, 2014.